Human Rights and Democracy at Gunpoint in Bangladesh 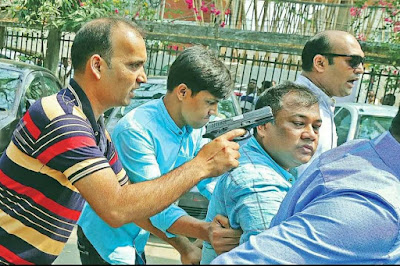 It was around 11:30 am on March 6, 2018. As part of the BNP's countrywide human chain programme, the party's Dhaka city unit formed a human chain in front of National Press Club, to protest the detention of Begum Khaleda Zia in a fabricated case. Within 15 minutes BNP's volunteer wing President Shafiul Bari Babu entered the press club to escape police arrest who were searching him like trained dogs.

A few minutes later, some plainclothesmen brandishing small fire-arms stormed into the sanctuary of freedom of expression of the country, rounded up Mr Babu, with arms in one hand and Mr Babu on the other, they dragged him away as if he is a war criminal of World War II. Whoever came on their way to ask about their identity were met with fire-shot threats. 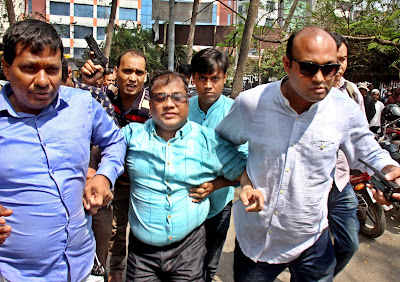 This is an incident, took place in broad daylight, in a so-called 'civilised' country where a self-styled Prime Minister boasts of carrying out development activities to legitimise her ruthless attitude towards opposing forces in the country.

A criminal state
When a state indulges itself in criminal activities, other crimes become incomparable to that.

Mr Babu is fortunate that he has been shown arrest by the law enforcers. Because in Bangladesh, where the state sponsors the most number of organised crimes, the government agencies barely show interest to prosecute the opposition party men. Instead, these agencies usually kill them, then either dispose the body or throw it somewhere far from the locality.

Some statistics can prove the above-stated claims. These agencies have killed no less than 1600 people extra-judicially. At least 500 people were forcefully disappeared. United Nations, in its report, sharply criticised Bangladeshi government for a "high rate" of extrajudicial killings and enforced disappearances, as well as "excessive use of force by state actors".

The ruthlessness of Bangladeshi forces is well documented. In a Swedish radio interview, one of the officials of the Bangladeshi death squad RAB exposed their brutal practices. The statement was so lurid that the translator had to go for fresh air three times while translating the statement.

No one, with an independent voice, can argue the fact that Bangladeshi forces backed by the government are operating in a manner that can only be compared to the laws of the jungle.

Silencing the voice
After crushing the opposition groups, the independent media are facing government wrath. Mahmudur Rahman and Shafik Rehman, two veteran journalists, were sent to jail because they reported of Sheikh Hasina’s relatives and ministers having been involved in corruption. Mahfuz Anam, the editor of The Daily Star, is personally facing 84 legal cases for sedition or defamation, with potential damages of US$8 billion. And prominent writer Farhad Mazhar was picked up in front of his home by plainclothes men and was mentally tortured for almost 17 hours.

And yes, this is the scenario of the media in the 'civilised' Bangladesh.

Anyone, who dissents the government view either faces harassment, cases or just gets shot down by Awami League men. A recent example of getting shot down in broad daylight for covering an incident is Daily Samakal's journalist Abdul Hakim Shimul by Awami League leader Miru in Sirajganj district.

Once outspoken Bangladeshi editor Matiur Rahman of Prothom Alo, in a recent interview with CPJ was found saying, "I don't have the courage anymore."

In the CPJ interview, all the media houses of Bangladesh admitted receiving repeated intimidating "advisory" phone calls from police, army intelligence, or the government. 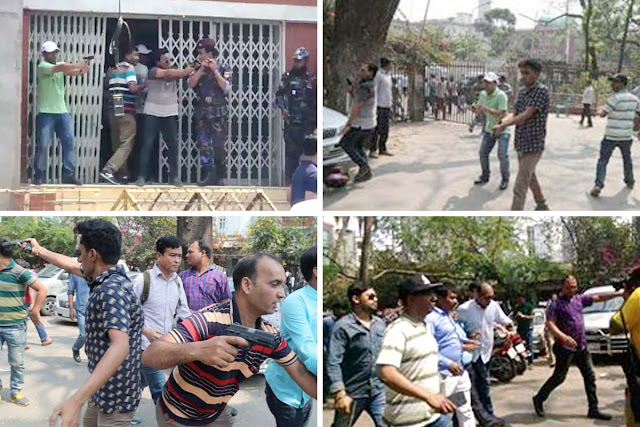 What next?
Article 09 of the Universal Declaration of Human Rights states, no one shall be subjected to arbitrary arrest, detention or exile.

Bangladesh, as a state, recognises the universal declaration of human rights and is bound to abide by all the articles of this universally accepted document.

In spite of its commitment to protect human rights, the Awami League led government is choosing every means to curb it. The international community has a liability to save Bangladeshi nationals from government repression, which is enshrined in the basic principles of humanity.

It is high time to liberate Bangladesh from the gang of oppressors led by Sheikh Hasina and her Awami League.

No way out?
Without any significant pressure from abroad, amid all the wrongdoings of Awami League, this party has gone ruthless. With a view to saving the situation, it is high time to make the Bangladesh government of Awami League answer the questions on why they would be given all the facilities, funds and supports from abroad?
Posted by akmwahiduzzaman@gmail.com at 08:02